Some websites to check out!

A new(ish) web-comic created by Harry Rickard, Hannes Smit and Michael Saunders called Door to Door is online! And don't get worried when I say that it is newish - because it has only been online for a little while (there are 5 pages) and you still read back!

Another website is The Beano Review Review. Please, BEFORE you go and read this website read a few posts on The Beano Review (if you heven't already) otherwise this blog will make absolutley NO sense too you!

And now Klank comic created by Rick Eades is a good website to check out. I'm not going to reveal too much - but here's a pic from the blog: 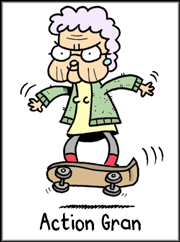 These websites will be added to the links list for you too check out!
Posted by George Shiers at 5:17 PM No comments: 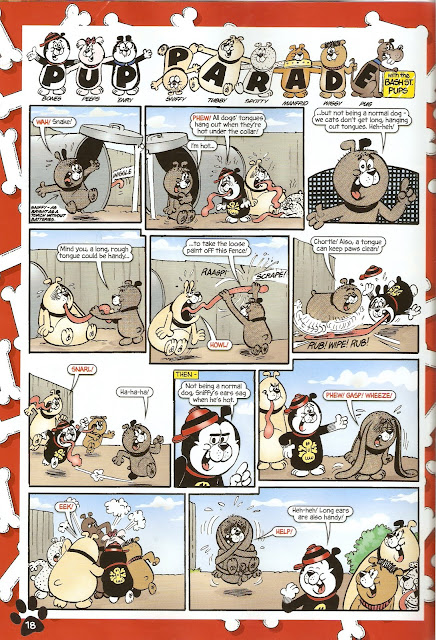 Yep! This weeks Beano features the return of the long-lost Bash St. Pups. Okay, so it's a reprint - I know! But it's still a nice feature to fill up a page that would otherwise have an advert on or something! There has been a lot of debates about bringing this pack back to the Beano, so I'm sure it will endlessly please!

So - if you want to see the Bash Street Pups in colour click above and then buy this weeks "Father's Day Special" Beano - and next weeks' issue! And the issue after that! Only £1.50!
Posted by George Shiers at 11:21 AM No comments: 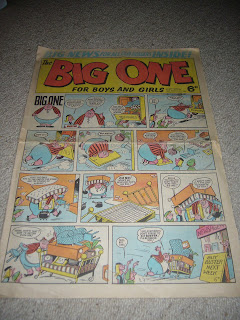 Before I get too carried off yapping on about a comic of which I have only one issue of, I thought I'd better put the facts out there first. Now, I was searching on Google the other day for some more information on Big One comic, and it seems that there is hardly any there! So I hope if anybody is after info on it that they find this! First of all, Big one was an experiment comic published by IPC and each page was just smaller that A2 (and I'm not talking about leaves, I mean each individual page!)It was launched on 17th October 1964 and ran for 19 issues, meaning that it ended on 20th Febuary 1965. It did have a 'Big One Birthday Club', just like Buster did at the same time! It was 100% reprints - save for Big One himself, drawn by Reg Parlett. Smiler was always on the front cover except for the last issue, which featured Big One. It had 1 Fireworks issue and one christmas issue. The first issue came with a free toffe bar, of which I'm guessing none exist any more. There was also a four page (?) flyer to advertise the Big One, as "Britain's Biggest Comic", the flyer was the same size as the comic itself. 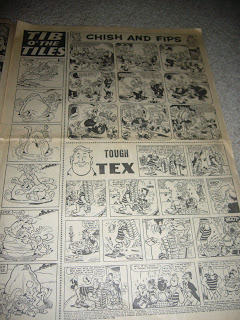 Unfortunatly, I know little more of the comic, but I do have the last issue, so I hope that the photos I have taken will be of intrest to you, as this could be one of the last, and best condition, of it's kind. 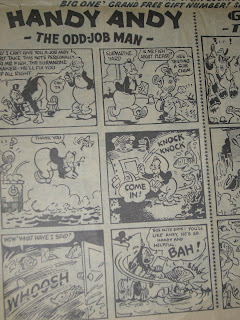 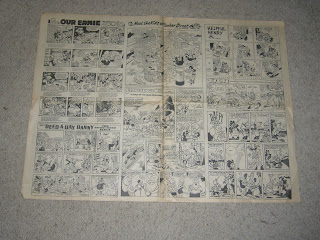 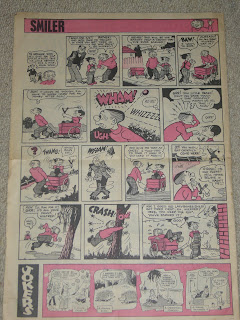 Email ThisBlogThis!Share to TwitterShare to FacebookShare to Pinterest
Labels: Big one, Buster, IPC

Currently up on eBay are 166 auctions posted by phil-comics! If you take a look you can find a collection of mid 1950's Beano comics, some early Commando comics, a large collection of TV21 comics and much more! Check it out now! 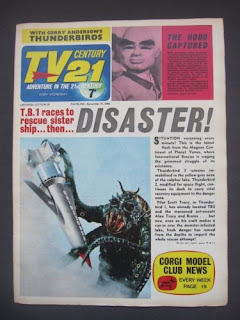 And if you want to keep up with the latest on phil-comics auctions, check out their facebook page!

Posted by George Shiers at 9:51 PM No comments:

The latest Compal Comics auctions end soon, so, if you are a comics fan, I suggest you head on over before it's too late! This catalouge consists of well over 300 auctions, including some early issues of The Beano and Dandy (and the 1940 Beano book at Lot #52!). 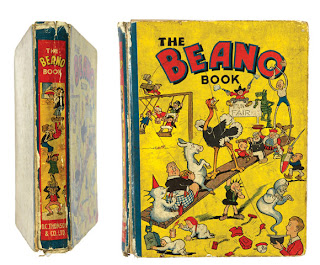 Other auctions that intrest me (I'm not personally a huge fan of American comics) are the Buster comics from 1960 - 1966 (Lot #181) and some original Faceache artwork by Ken Reid (Lot #236). So make sure you head over to www.compalcomics.com , bidding ends 8pm UK time.
Posted by George Shiers at 9:01 PM No comments: 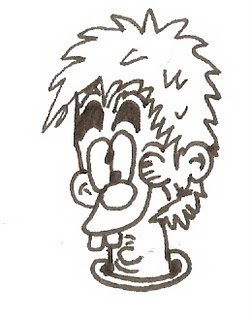 Attention everyone! I have started a small, temporary online buisness called "Cartoon yourself". Basically, you can buy a cartooned version of yourself! If you are interested please head over to the website: http://cartoon-you.blogspot.com/. Thanks everybody, 'coz I really need the money at the moment! :)
Posted by George Shiers at 9:52 PM 3 comments:

Email ThisBlogThis!Share to TwitterShare to FacebookShare to Pinterest
Labels: Cartoon-you 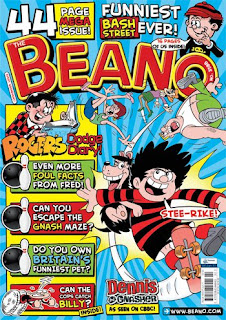 This week both The Dandy and The Beano were 44 page specials. I am going to start with the Beano. Now, if I was to spend about three quaters of the post moaning and groaning about Fred's foul facts and the extra Bash Street kids pages that somehow make it a pull-out - then this blog would be continously repeating on itself. After all, I wrote about all that in my previous two Beano posts. Seeing that I hated it when there were two pages, I am not, repeat: NOT, going to stand this. As well as the 2 useless pages we already had, they've put in 4 extra pages with made up drawings and reports. But I'll forgive them as they put in a 10 page Bash Street Kids story! 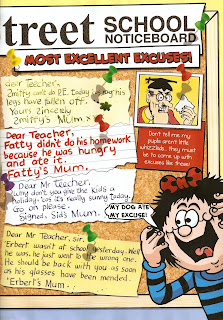 Moving on, I thought that the Dennis the Menace artwork was good this week (especially the box scanned below), as was the brightly coloured Numskulls! It's one of my favorite stories yet! 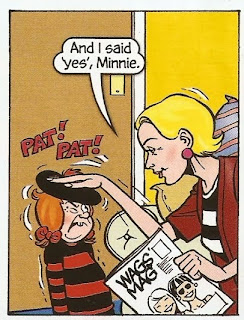 Also, we saw Minnie the Minx's mum in this strip, which, as far as I can remember, is for the first time! (Can anyone correct me on this one? I'm sure The Beano Review are going to love her! 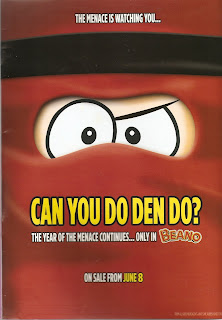 And finally, "DEN DO"... what do you think it is? I'm guessing something along the lines of Beano Manga, who knows? 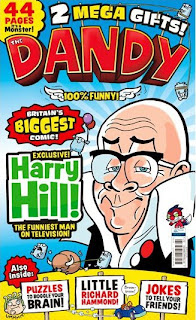 Ok, now moving onto this weeks Dandy. Now I knew instantly that the so called "suprise gift" is an old, unused gift from the old Dandy Xtreme comics. How do I know? Well, I got a Xtreme-erang! Which was basically a green, plastic boomerang with a small sticker on it. It will forever remain sellotaped to the cover of the comic. (This weeks Beano gift was MUCH better - a Dennis and Gnaher mini bowling alley!) The other gift was some "Bogies stickers", excellent artwork as I'm sure you'll all agree. 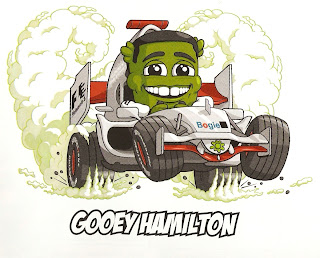 This weeks madvertisement (drawn by Nigel Auchterlounie) was the classic "open eyes specs"! You know the one - where there is a picture of some glasses with eyes in them so that you can sleep in class but look like your still awake! Amazing! 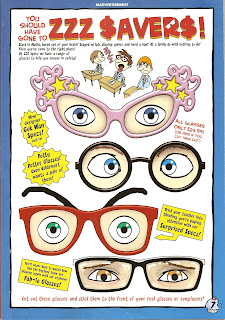 Another of Nigel Parkinsons "Where's Harry?" puzzle is in this weeks issue. Tell you what, I'll let you in on a little secret. Here's where you'll find Harry: !%&!#$"{}+_--(_)*! The Harry Hill story this week was also quite funny, but I'm not quite sure how it got from an Elephant in Harry's bed to a runaway teleision. Just another myster in The Dandy! You will also spot Dave the Squirrel in George Vs. Dragon - make sure you like his facebook page! I also liked this weeks Sea Dogs, who were been chased by Cut-throat Cat! ARRRRR!!!!! 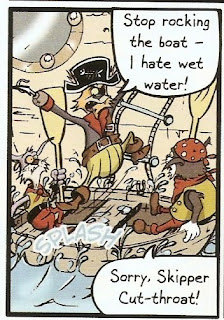 Both The Beano and The Dandy were great this week, so make that you go and pick up a copy!
Posted by George Shiers at 11:44 PM No comments: 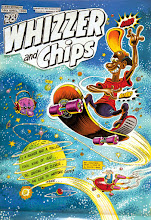 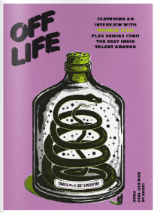 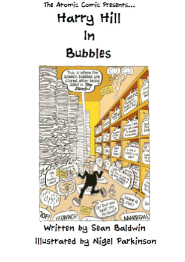 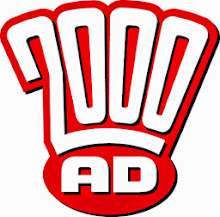 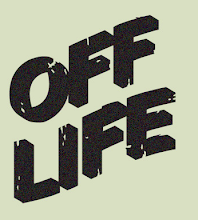 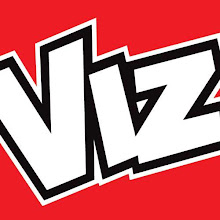